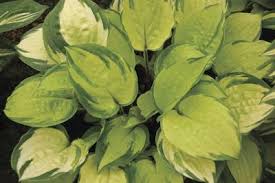 Some wild and wonderful things happen in the world of plants. Even experts are often taken in by Mother Nature and her antics. Hosta growers need to be aware that mom is up to her old tricks and has perpetrated one of her nastier pranks on those who sell and grow hostas. While reputable vendor are attempting to protect the hosta population, those who delight in the more fantastically patterned hosta need to educate themselves on what is a legitimate patterning in a hosta and what may be a pattern caused by a disease.

In 1996 it came to the attention of horticulturists that a virus subsequently named Hosta Virus X could become a potential problem for the hosta. This virus was part of a group of viruses known as potex viruses that mainly infect potatoes. They symptoms of HVX were so varied that it wasn’t readily apparent that plants were infected. Breeders were actually registering the infected plants as new cultivars. Additionally, the virus might cause no symptoms in an infected plant but that plant could still be shedding live viruses and infecting other plants. Hosta Virus X can manifest in various ways. One of the most common symptoms is bleeding along the veins and edges of the hosta leaf. This stands out particularly in variegated hostas where lighter or darker coloration along the veins interrupts the patterns on the leaves. Another symptom is blue/green mottling of the leaves. This is most easily seen on the lighter portions of the leaf. The virus can also cause twisting of he leaves and even loss of entire leaves in the more susceptible varieties. Leaves my pucker or develop mosaic rings or general spotting of the leaves as well as zipper like tracks. It rarely causes death unless it is a super sensitive heavily infected plant.

This curious collection of symptoms and the fact that the virus does not kill the plant led to plant experts touting virus infected plants as new and exotic varieties. Mother Nature sat back and chuckled. Among the plants that are sold as varieties that were actually derived from this virus infection are ‘Leopard Frog’, ‘Blue Freckles’,‘Lunacy’, ‘Eternal Father’, ‘Kiwi Watercolours’ ‘Parkish Gold’.and ‘Breakdance’.

Introduced in the year of 2000 by Randy Goodwin ‘Leopard Frog’ is described as being a “yellow mottled green” leaf with streaks. Goodwin submitted this explanation, “Most people form an immediate opinion when they see this plant, with its gold leaves splotched with green. It is a ‘Little Aurora’ with odd variegation. Testing by Dr. Ben Lockhart has confirmed this is caused by a virus. At any rate, I registered it (in 2000) for the following reason: it is stable. I have had the plant and all its many divisions for 5 plus years and have never known it to affect any adjacent cultivar. Nor have I manually infected another plant using same knives, etc. Leaf size and flowers are the same as ‘Little Aurora’. The patterning holds all season. The only change comes at mid-season when the second flush appears and generally shows none of the patterning seen on the spring flush.”

‘Break Dance’ was registered in 2001 by R & L Miller. It was a sport of ‘Fan Dance.” The color is described as yellow with green mottling and a green edge. Despite the fact that this is a confirmed carrier of the HVX virus it is it is described as a “very good grower”.

‘Blue Freckles’ is a sport of Hosta ‘Birchwood’ ‘Parky’s Gold’. The Originator is B. Martin. It is just listed as “probable” for the virus. It is not to be confused with another hosta known only as ‘Freckles’.

‘Eternal Father’ is a sport of ‘Sunpower’ It is a yellow leafed hosta with thick green mottling. The originator ( J. Willetts ) has this to say about it, “Hosta ‘Eternal Father’ is unlike other mottled plants available. I have seen the others. They typically are a green leaf with yellow mottling.’ Eternal Father’ has yellow leaves and the mottling is very dark green. The plant comes up in spring with the mottling partially visible. The green develops gradually. The plant in full sun is superb, being very gold with no burning. The original plant is the size of a mature H. ‘Sunpower’. The original plant in 1992 was sickly and I (originator) thought it would die. I observed it for 4 years before I realized it was healthy. The plant was registered in 1999. It has grown additionally and I will update the info.” This one is apparently still to be found in gardens but is not for sale commercially as the virus is confirmed.

‘Lunacy’ was developed by Frank Riehl and is a sport of ‘Moonlight’. It is a large host reaching a diameter of 50 inches and is a green mottled with yellow. It is a non-registered cultivar that has tested positive for the virus. While not on the market there are apparently plants still to be found in gardens.
‘Kiwi Watercolours’ was introduced byBarry Sligh of Taunton Gardens in New Zealand and is part of the Kiwi Series of hostas. Its pattern is the result of HVX.‘Kiwi Dreadlocks’ another hosta in this series has been diagnosed as “probable” for this infection. ‘Parkish Gold’, ‘Strip Show’, ‘Tie Dye’ and ‘Pamela Ann’ are also listed as probable virus caused sports.

These plants whose exotic patterns are the result of HVX have generally been taken off the market. This hasn’t solved the problem as any hosta is susceptible to this virus. Some varieties may be more prone to contract it than others. A plant may become infected and symptoms may not manifest for up to 4 years. According to Dr. Lockhart, who presented his research at an annual meeting of the American Hosta Society, plants are more likely to be infected in the early spring during the rapid growth period and are almost impossible to infect after they have bloomed. If this is true susceptibility may be more dependent on time of exposure rather than resistant varieties. His research also suggests that despite the previous contention that hostas could be replanted in the soil where virus infected plants were previously grown the virus remains in the soil.

There is no cure for Hosta Virus X. Infected plants should be dug and destroyed. They should not be composted or tilled into he soil. As much of the root as possible should be removed from the ground. The virus is not transferred by insects nor is it air born The only transfer mechanism is via direct contact of the sap from an infected plant. This can occur when a plant is divided, deadheaded, trimmed or even stepped on. Tools should be disinfected between plants and hands should be washed when working with plants that are suspicious.

So how can you tell if you are harboring this virus among your hostas? According to Josh Spece, of In the Country Gardens and Gifts, which specializes in hostas it is the texture of the leaf as much as the coloring that is indicative of the virus. He says, “The leaf tissue of HVX infected plants often appears lumpy, puckered, and of different thickness or texture than healthy plants. Leaves often appear to have patches or streaks of sunken, wrinkled or collapsed tissue. These symptoms are subtle and require a sharp eye and practice. Spotting these textures can be nearly impossible on hostas that normally have heavily puckered leaves.” There are, of course, hostas that have mottled, speckles or patterned leaves that are not the result of the HVX. These plants have more random patterns and the coloration does not bleed out from the veins as it does in the virus caused patterns. The patterning in non-virus caused cultivars also changes with the amount of light the plant receives. The fancy patterning may fade as the season advances or may not occur early in the season. At some point the leaves may be a solid color. There is no pattern change in the HVX infected plants.

There is a test for the virus but it is probably not a reasonable thing unless the grower is a hosta connoisseur. The Iowa State Plant Disease Clinic accepts plants for testing. The address is 351 Bessey Hall, ISU, Ames. Iowa 50011. Phone (515) 294-0580. The fee per sample is $10.

Hundreds of thousands of hostas have been destroyed because there was a suspicion that they were infected. One plant proving positive in testing can condemn all plants growing nearby. The virus spreads prolifically and is difficult to diagnose. While the virus isn’t lethal keeping the stock clean is a primary goal of breeders. The home gardener’s prime defense is to know what the plant being purchased should look like. Any odd variations in color or texture may be a warning sign. If a plant looks wrong pass it by.